Tony Meeuwissen – The Key to the Kingdom

It is 25 years since Tony Meeuwissen became the first illustrator to win a prestigious D&AD Gold Award Black Pencil. Tony collected the award for his three-year passion project The Key to the Kingdom, a deck of intricately illuminated hand-painted playing cards. To mark the quarter-century anniversary in 2018, we are pleased to share the project’s entire collection of original illustrations. 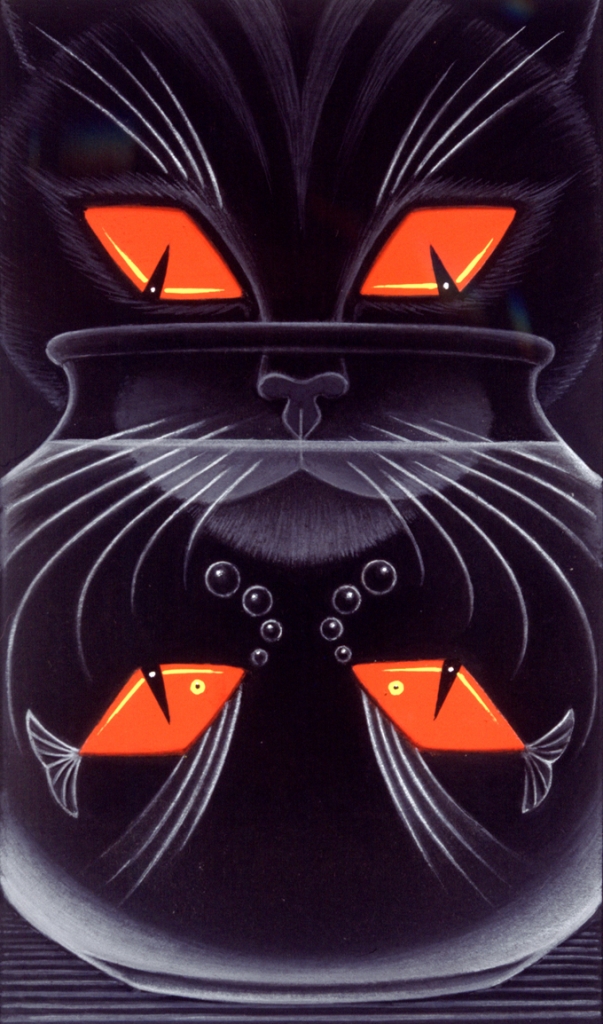 In 2013, Tony was awarded the title ‘Royal Designer for Industry’ by the RSA; only 200 designers can hold the title at any one time, other royal designers include Vivienne Westwood, Peter Blake, James Dyson, Quentin Blake and Gerald Scarfe. Tony has also been awarded the Francobollo d’Oro award for the world’s best stamp and has won two D&AD Gold Awards, one of which was for ‘The Key to the Kingdom’.

The Key to the Kingdom

In the late 1980s, a collector and occasional commissioner of curious and historic card decks, based at London’s Victoria and Albert Museum, gave Tony an intriguing assignment: to design a set of court cards for a new deck to be based on traditional nursery rhymes. From this developed the irresistible challenge of designing a full set of transformation playing cards.

First appearing in the early 1800s, transformation playing cards incorporate the suit ‘pips’ into an intriguing illustrated scene. Because the form enjoyed a relatively brief heyday, they are now highly sought after by collectors.

Each of Tony’s original artworks was created in gouache, watercolour and pastel at postcard size, requiring incredible attention to detail – not to mention pin-sharp eyesight and a steady hand.

The companion volume exhibits each card along with the verses and riddles that inspired them, featuring passages from Rudyard Kipling, Thomas Hardy, Ogden Nash and Lewis Carroll. 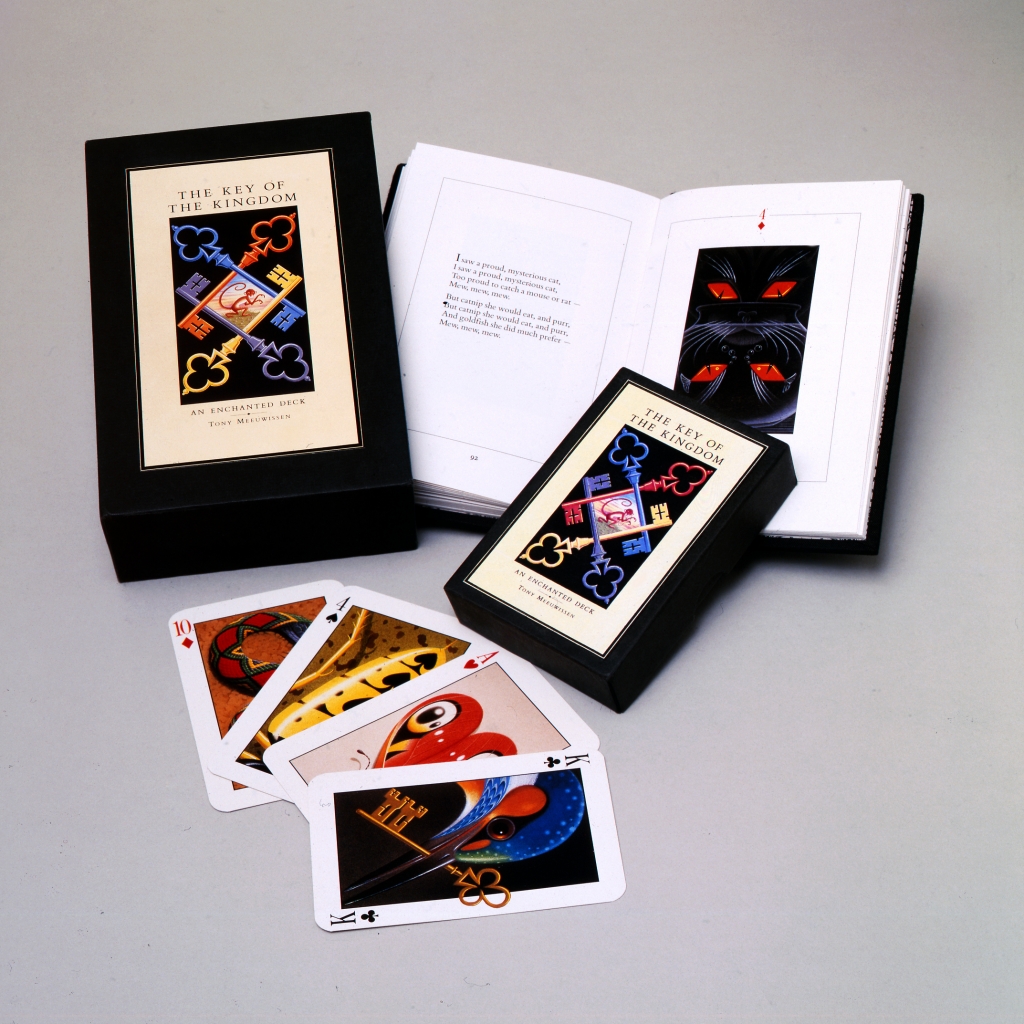 “An enchanted deck is a kingdom without walls, yet entry is impossible without the key. Hidden within are clues to an undiscovered mystery, fragments from a half remembered dream or a forgotten riddle.

A surreal turn has transformed an ordinary pack of playing cards into a fanciful gallery, where art and verse brush against each other, casting off curious sparks and shadows.

Fifty-three cards. Four familiar suits. The landmarks are the same, but the scenery is somehow different.” 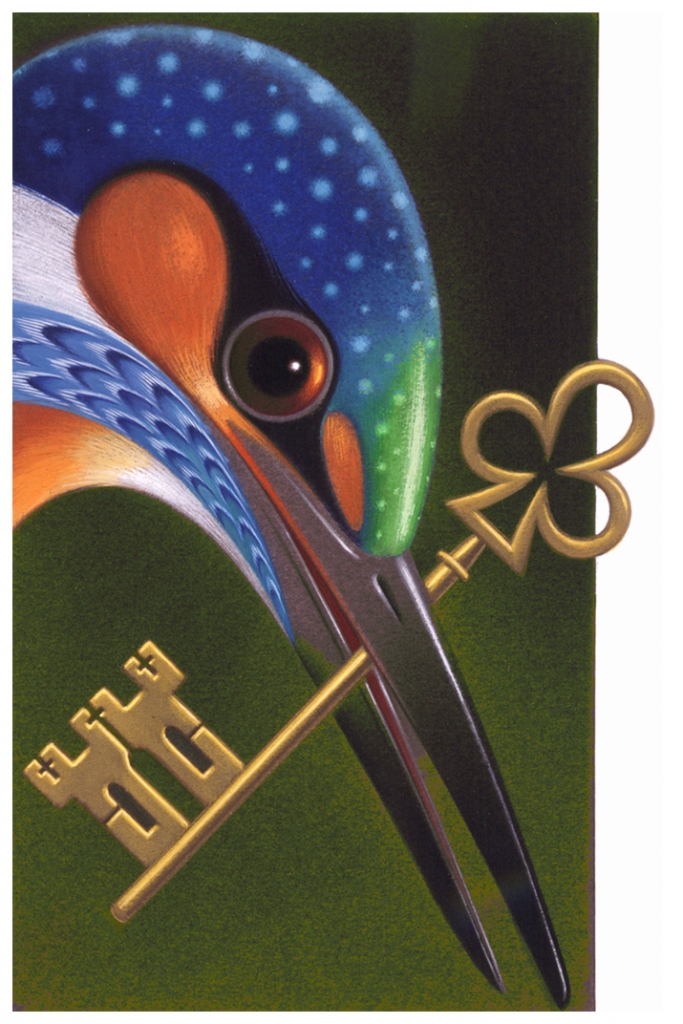 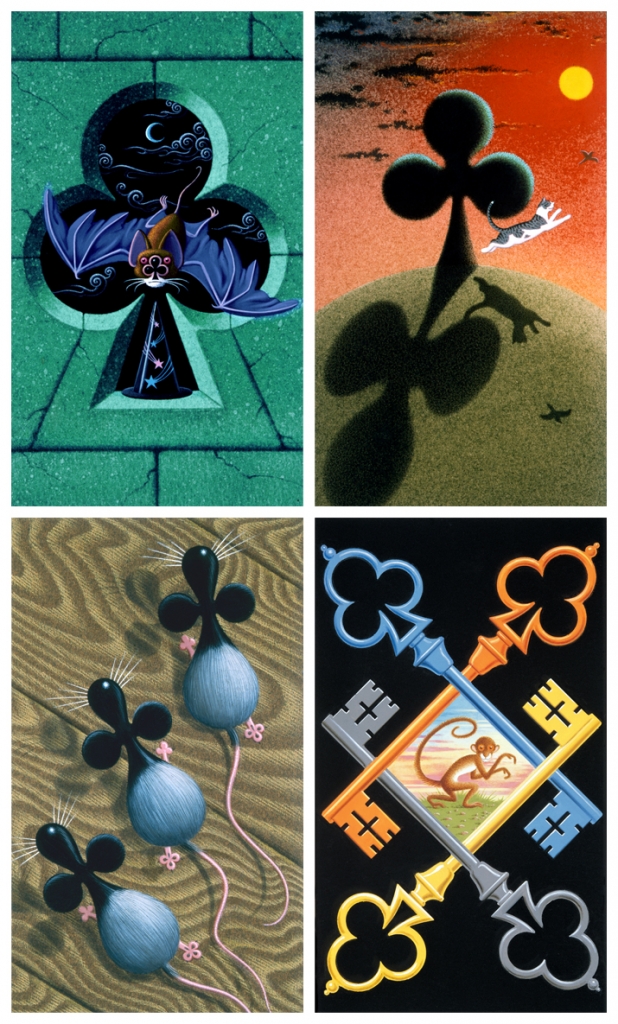 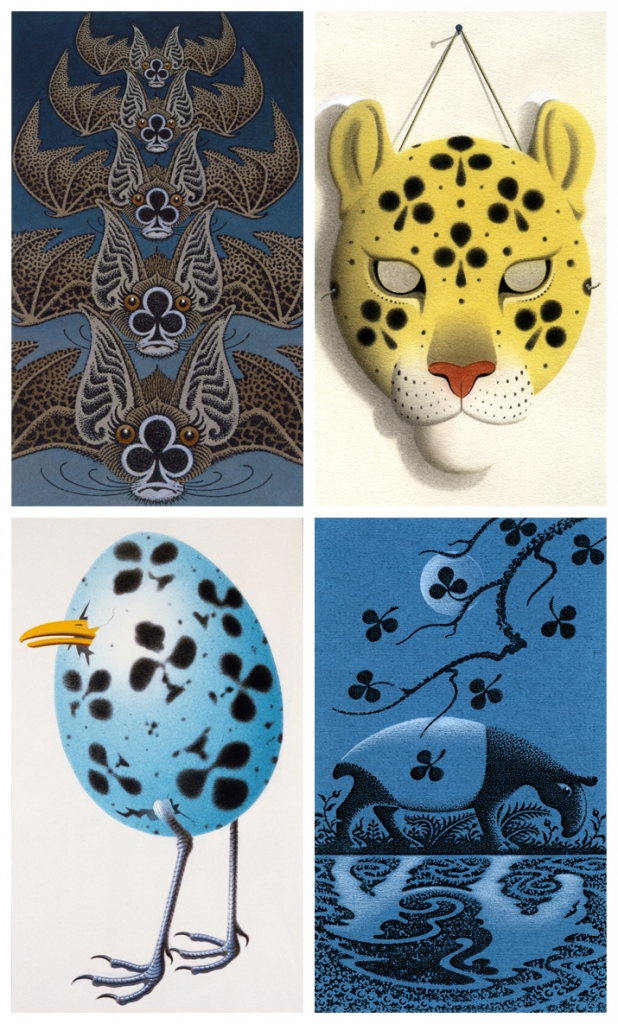 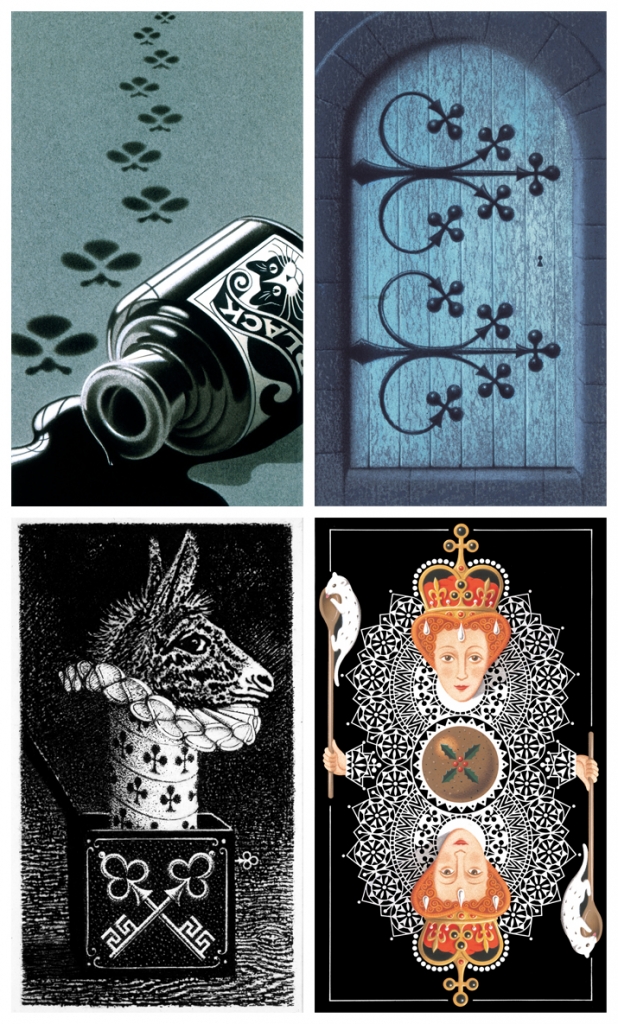 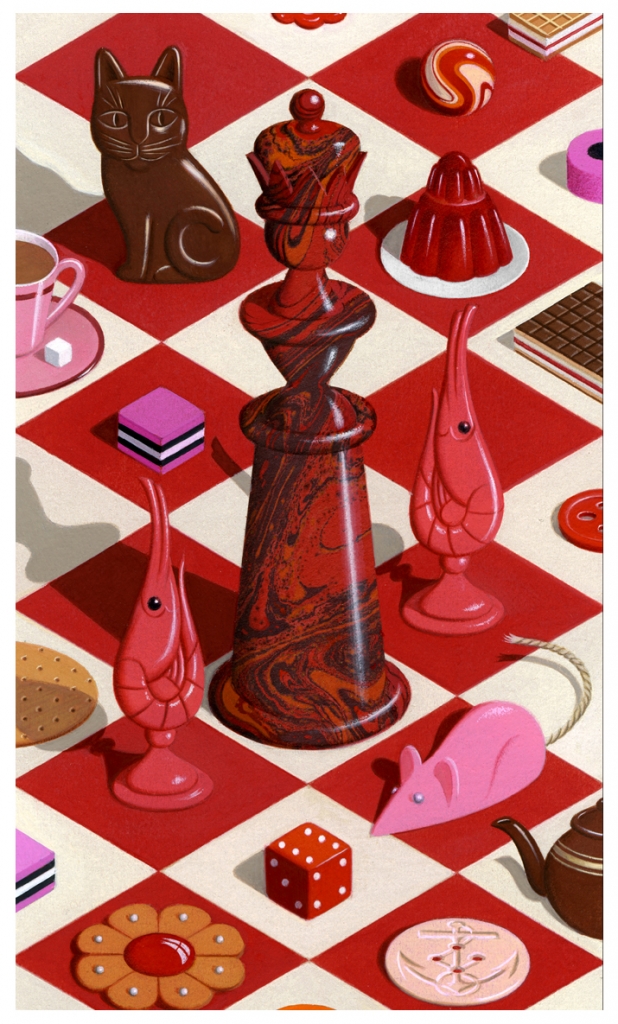 “Oh Looking-Glass Creatures,”
Quoth Alice, “draw near!
Tis an honour to see me,
A favour to hear:
Tis a privilege high
To have dinner and tea
Along with the Red Queen,
The White Queen, and me!”

“Then fill up the glasses
As quick as you can,
And sprinkle the tables
With buttons and bran:
Put cats in the coffee,
And mice in the tea —
And welcome the Red Queen
With thirty-times-three!” 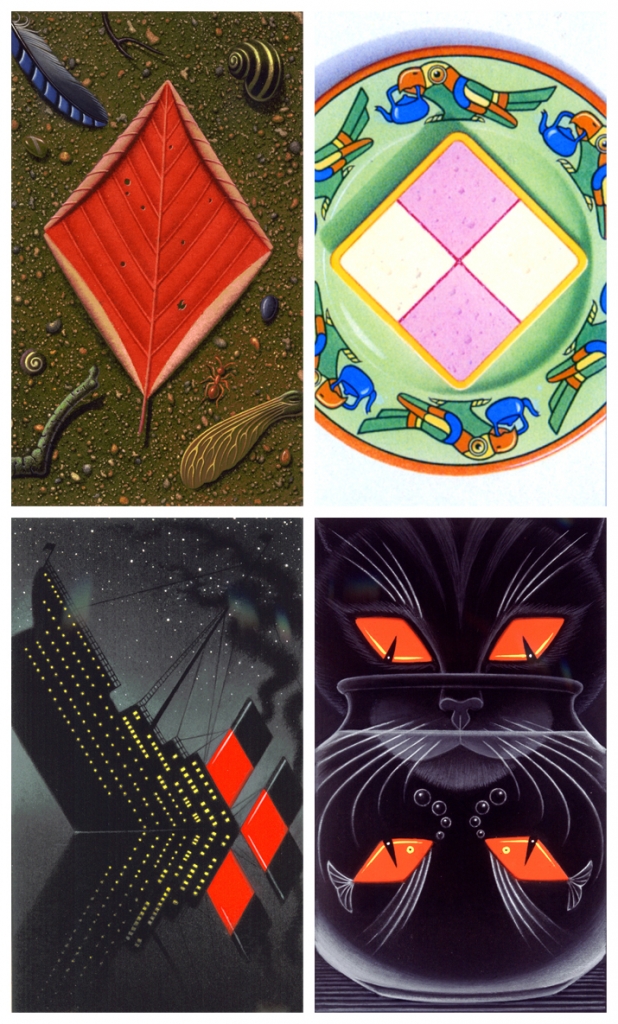 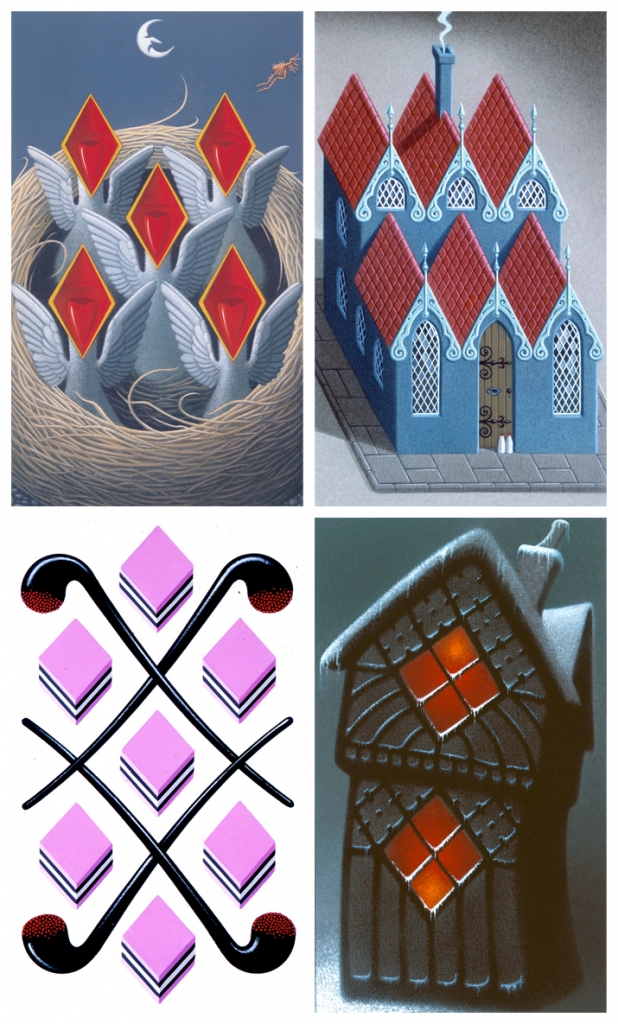 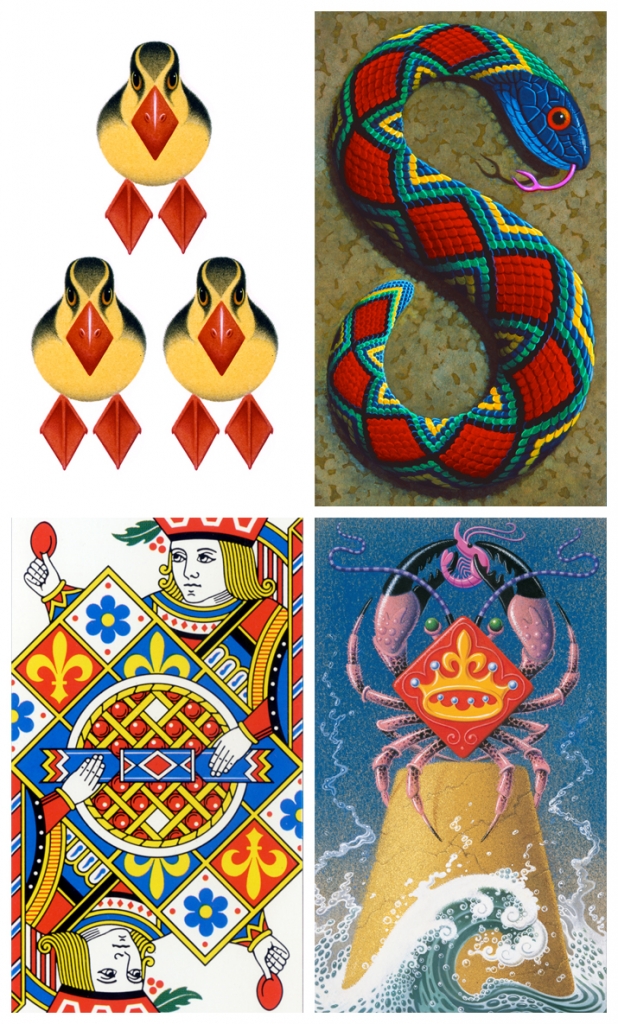 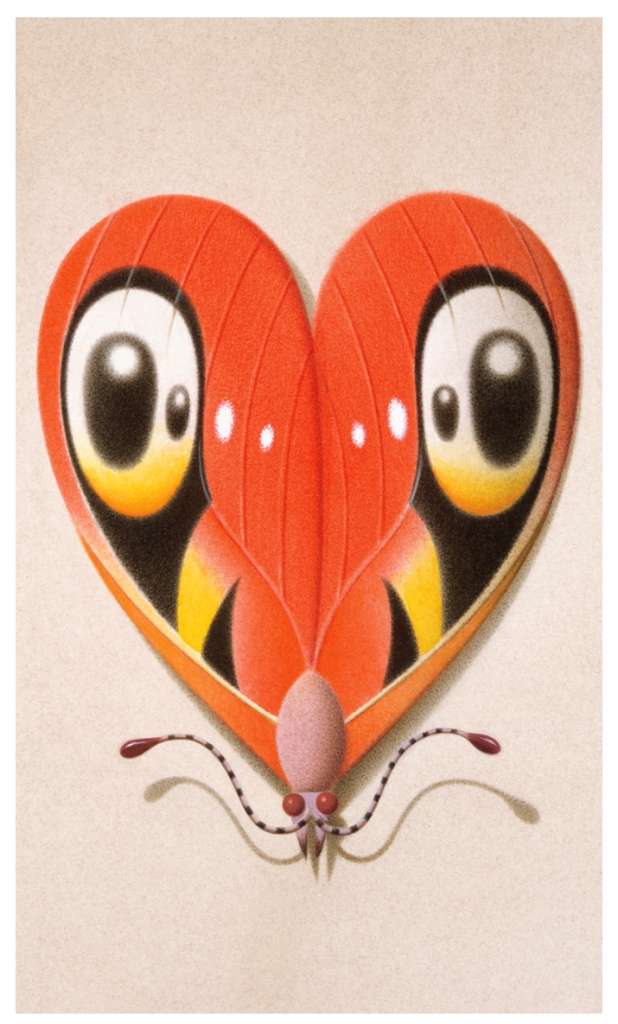 I’m a little butterfly,
Born in a bower,
Christened in a teapot,
Died in half an hour. 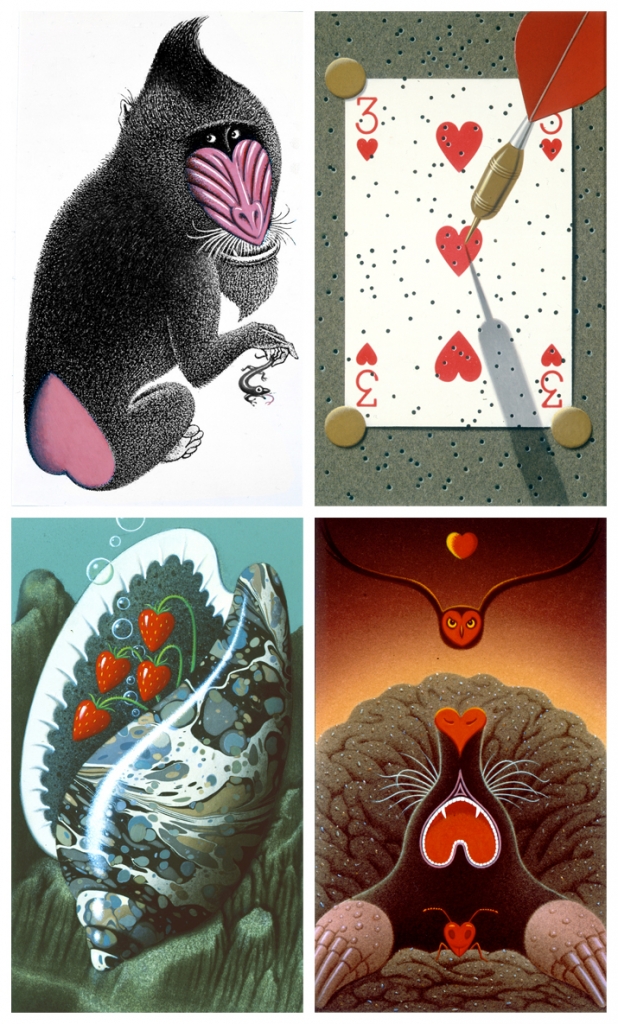 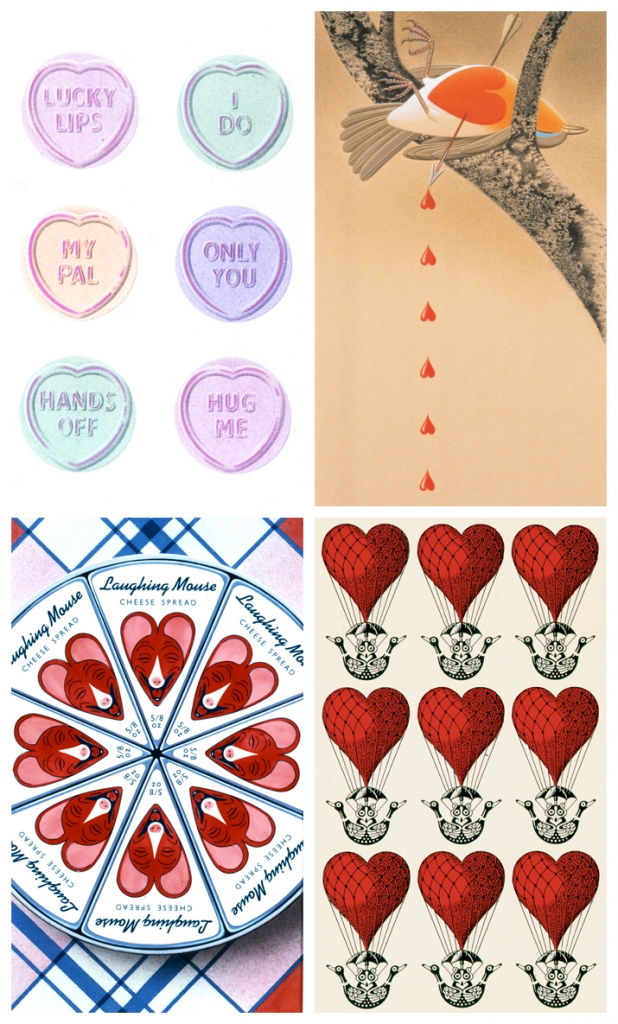 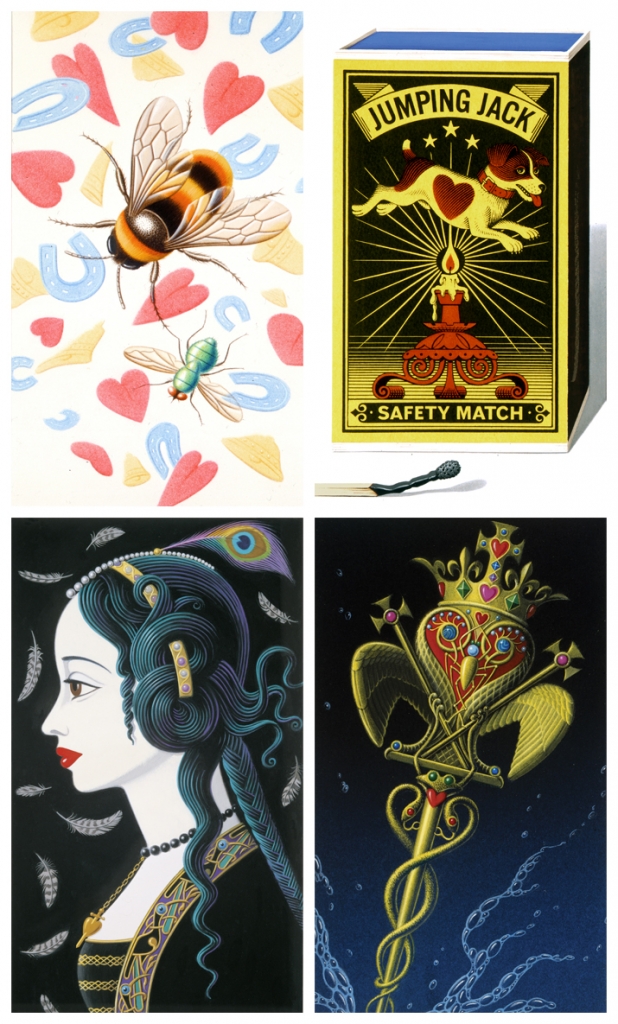 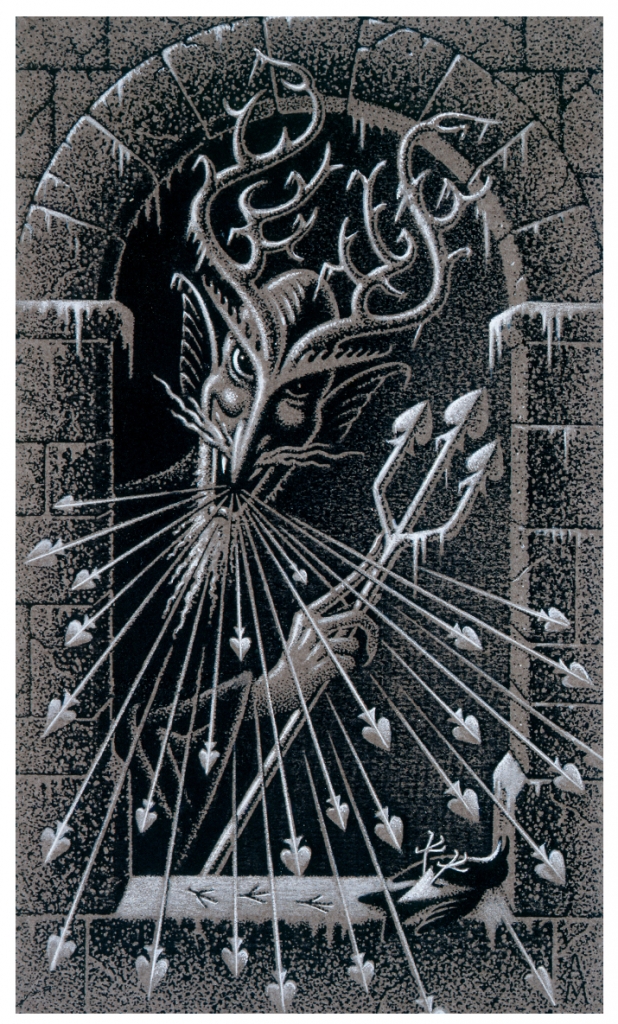 Look out! look out,
Jack Frost is about! 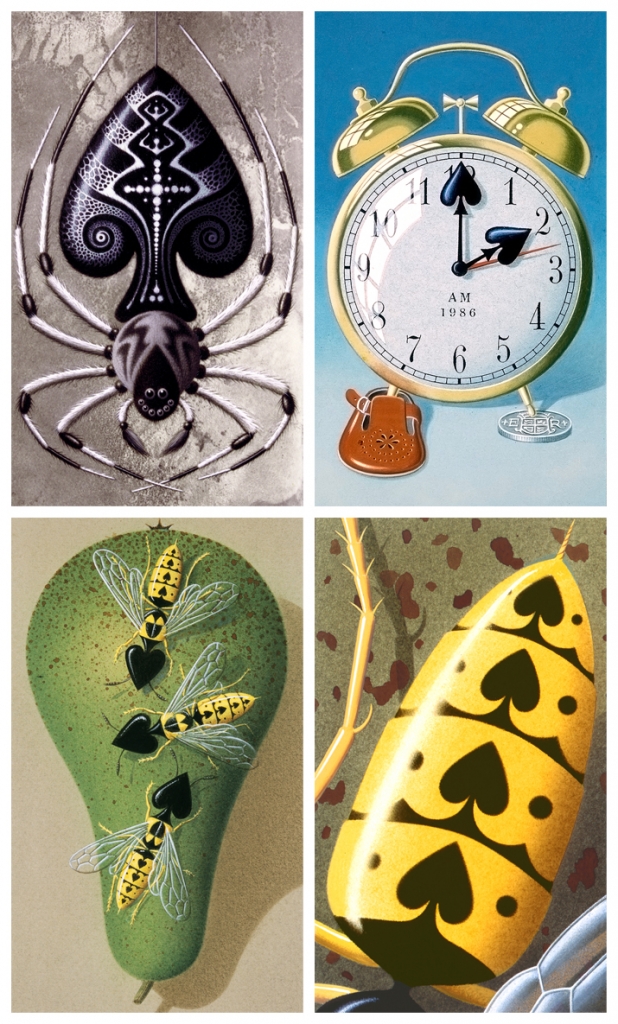 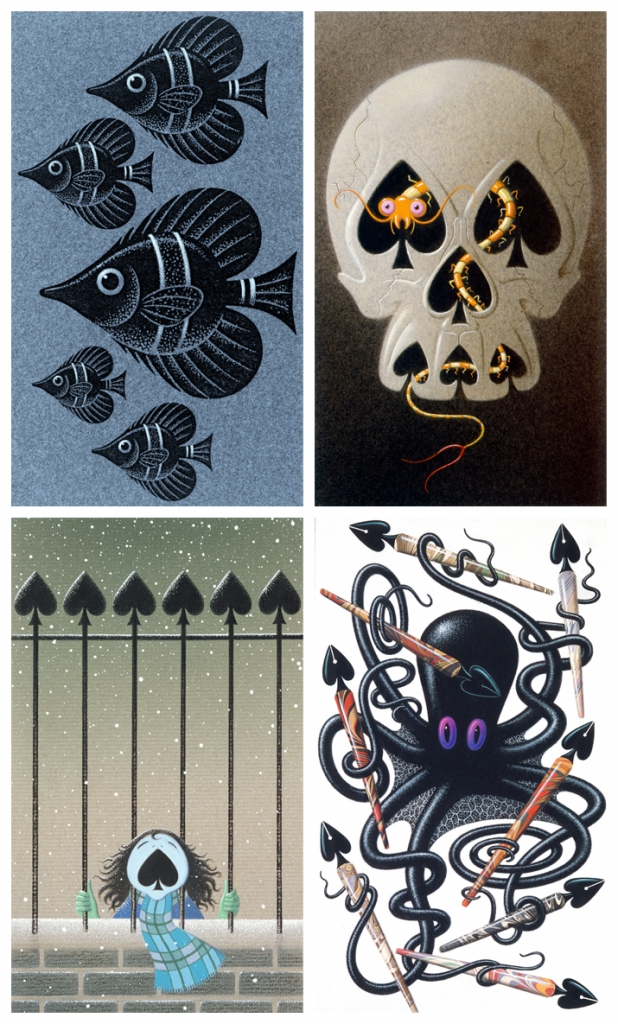 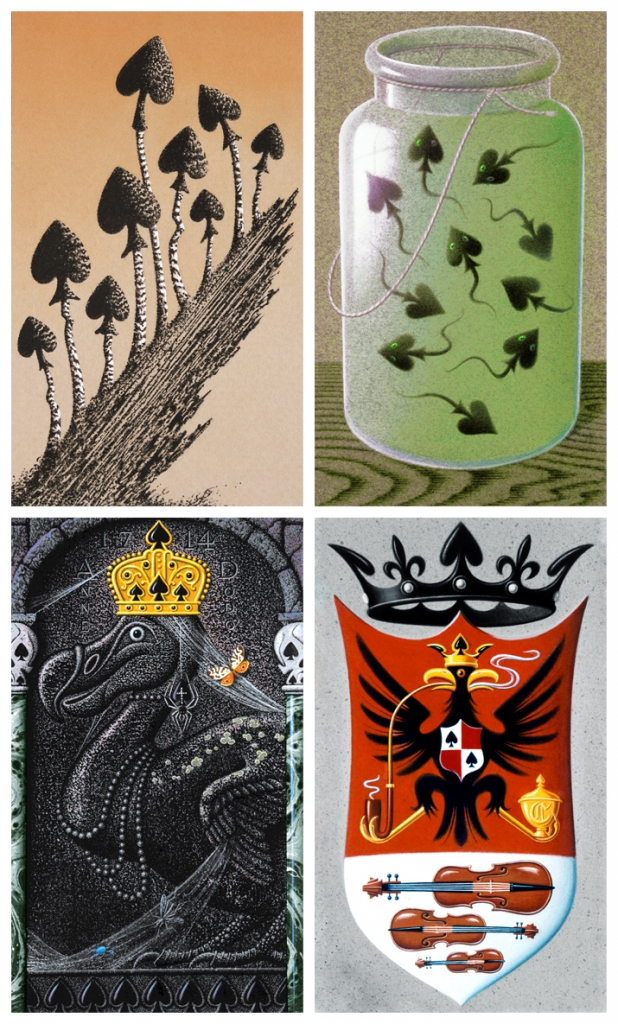 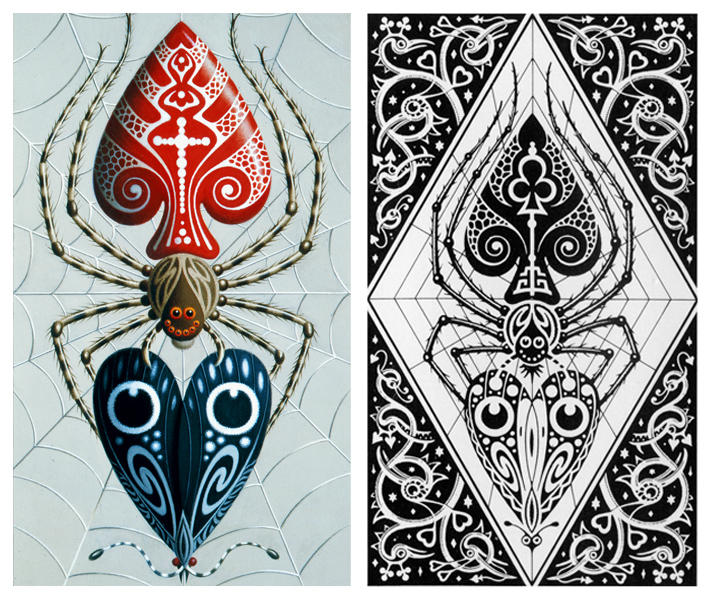 If you want to live and thrive,
let a spider run alive.

In the Studio: Sam Kalda