In the Studio: David Lawrence

Pastiche artist David Lawrence began his career as an anatomical illustrator and his emphasis on strong technique has allowed him to master a wide variety of traditional and digital media. This incredible range enables him to produce convincing pastiches of Old Masters and other historical imagery. 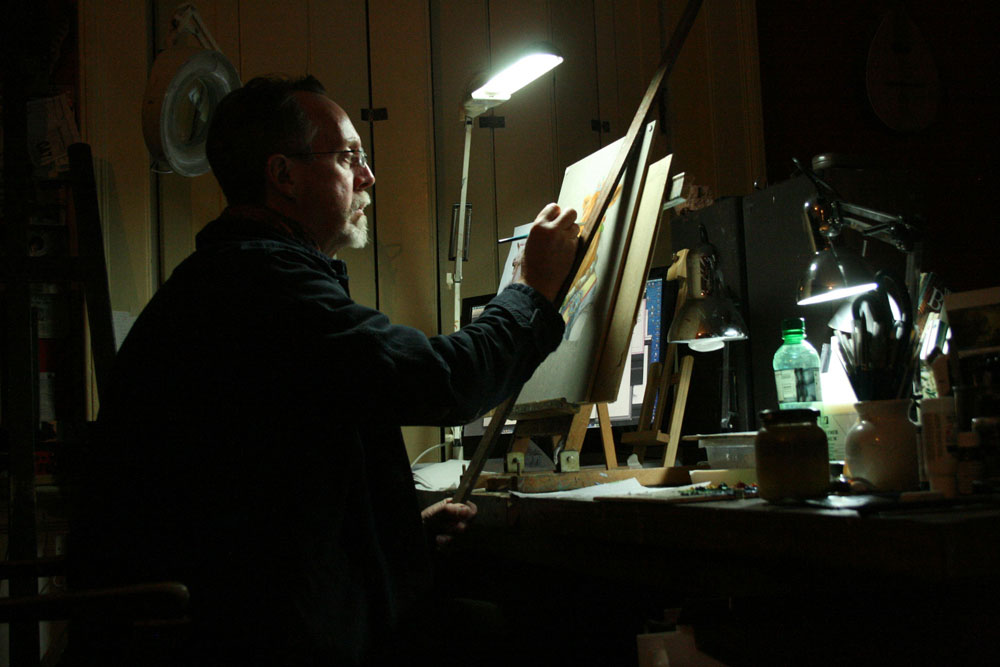 As a pastiche artist, you began your career as an anatomical illustrator with an emphasis on strong technique, which has allowed you to master a wide variety of traditional and digital medium. Which project, to date, has tested your style and working method?

At Art College I was only actually taught to use watercolour  – in a careful, diffident manner. Getting to grips with pen & ink, scraperboard, oil etc has really been done ‘on the job’, necessity being the master of invention.

There’s no ‘one’ project, which says it all, but some recent jobs have proved enjoyably challenging: it’s great when they work – but they can have scary moments. There was a big exhibition at the Maritime Museum in Greenwich recently (it’s now on a global tour) – one of the things I had to construct was a LIFE SIZE Coffee Shop – frontage, interior, groups of men discussing & disputing and some freestanding characters all in the style of William Hogarth (a million, million lines). It worked – phew! And that came hot on the heels of doing all the illustrations for the Hexham Abbey Visitors Centre – numerous exhibits in various styles – medieval maps, stained glass windows, Roman carvings. The trickiest thing there was a 5m long painting of the construction of the building, in the style of an Illuminated Manuscript.

How would you describe your practice in five words?

Get up early, work hard.

I don’t think I’ve ever got work from exhibitions – I don’t really know. Personally I get commercial work through word of mouth, reputation & web exposure (metatags play a key part in this). I’m not aware of my work being exhibited or what effect that might have.

I do exhibit my own ‘personal’ painting: I paint in the ‘pop surrealist’ genre. Making progress in the Gallery world is whole different ball game.

What are the first three initial steps that you take when a commissioner approaches you for an illustration project?

When, for you, do illustrations how more strength than words?

Is that not the raison d’etre of good illustration when used in advertising & publishing?: one is arrested by the image long enough to read to message.

Working within illustration and creativity can have its highs and lows. What are your three constraints and three motives to work during the day?

I am constrained by my limited imagination, clumsy fingers and dull wit.

I am motivated by the thought that this is possibly the one image in ten that really works, by the desire to be as good as my peers and by money. Fear – of not earning – was a constant companion & motivator in the early days.

Confucius said something like “If you labour at something you enjoy you won’t have to work a day in your life” – which I hold to be true in many ways. There are many, many worse jobs than spending your day drawing and painting. And what would I do in my spare time, as a hobby? Probably draw & paint. So really it’s not like REAL work, is it?

Within your studio pick three objects that are most valuable to you and explain why you have chosen those. Is there a story behind them?

The Mac, of course. And the Adobe programmes which make it so much fun.  After the recession of the early 1990’s illustration work died out for a while – Macs were just coming in & Art Directors were seduced by the ease of image & type manipulation. Illustration was old hat – a lot of people left the industry – I went off to become a commercial sculptor for over ten years.

I returned to illustration in 2006 – to a different world. Of course I had to undergo a crash course in the Mac and software – I remember I couldn’t sleep for a couple of nights when I first saw what could be done with Photoshop: the possibilities were just SO thrilling.

It changed the landscape – but I’m bloody glad I’d already learned to draw & paint. No matter how fancy the finish I think the fundamentals abide.

Internet Audio entertainment: many, many hours at the drawing board means that some form of aural diversion is needed. Thank the Lord for Spotify and Audible – how else would I have got to read Ulysses?

Brushes, paints, board, etc seem almost too prosaic to be included in the three.

I guess a Wacom tablet is the single most useful piece of hands-on equipment I have.

For a young artist looking to break the wall and enter into the illustration world, what three pieces of advice could you offer to them to help get them on their feet?

Learn to draw. Learn to draw. Learn to draw. Stylish illustration is great. Even better if your work can be instantly recognisable and better still if it becomes fashionable. But fashions change – you can go out of vogue as quickly as you came in. And over the forty plus years of a career fashions will come, go and come again. One will possibly have to reinvent oneself several times. The ability to draw & use different mediums means you won’t be style bound & marooned when the tide goes out – and go out it will.

Following on from the previous note one needs ambition and grit to survive. You can’t do this job if you’re nervous or diffident. There is no road map, no career path. Sometimes you get knocked pretty hard. No one cares if you’re knocked flat. The trick is to stay on your feet, lick your wounds and get on with it. Just get on with it. It’s not a job for the feint-hearted. You need good business sense. Don’t be an arty fart: do the paperwork, pay the VAT & Tax, don’t get wrecked, check the ego. Being able to draw is one thing – being able to make it work as a moneymaking business is something else altogether. It’s never taught at art school – the way to survive those quiet dips is save some money when you have it.

And smile at clients, no matter how badly they behave. ‘Eat, shit & smile’ is a nostrum by which I have lived.

This you need to do until you are a marketable commodity. It’s worth it – but starting is hard. Unless you are BRILLIANT you have to realise the world isn’t holding its breath until you come through the door. Is there a short cut? No, not for most of us.

Tiredness is a state of mind. You can deny its existence. You don’t have to sleep as much as you think you do.

In the Studio: Alexander Wells